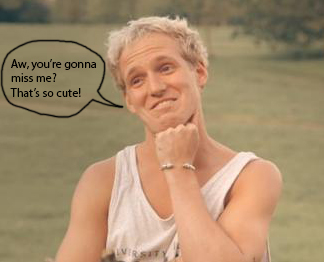 In the last cold week of January – the month where everyone decides to get on track and pursue their dreams – namely by getting up two hours earlier each day, completely giving up drinking (well, during the week at least) and cutting out reality TV – God, I miss The Real Housewives of Cheshire already, and Jamie from Made in Chelsea and the stupid way he splays his fingers when he sips G&T through a straw. Yeah boi! But it’s doable, right? If you really want something, you go for it, and you make it happen – yeah boi? Yeah boi!

So, on that miserable, frosty morn, I decided to commit to writing, screenwriting to be precise. So I signed up for the ‘First Steps in Screenwriting’ 10-week course at City University. 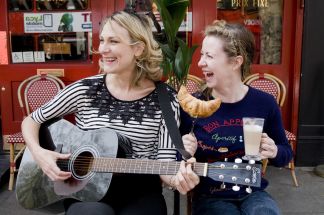 Writing and performing as The Aspidistras

Don’t get me wrong, this was no epiphany, I had, in my mind, already written a tonne of stuff. Three Edinburgh shows as a comedy duo – The Aspidistras – you may have been one of the hundreds that saw us in our heyday of 2010, when we cunningly did a breakfast show offering free coffee and croissants.

Man, we were big among the sober, 40-70 rucksack crowd. We were on FIRE. Even the producers of Miranda came to see us. And Dave Lamb – you know – the guy who does the voice from Come Dine With Me – yeah, him! We were hanging out with LEGENDS I tell you. We could almost taste some kind of mid-afternoon BBC3 fame. Then we split up. 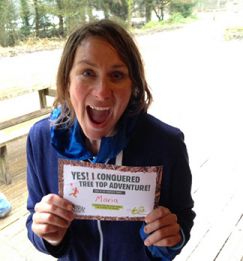 My comedy partner, the amazingly talented Maria Hodson, had had enough of London (her six-foot-one frame was too cramped by the tiny streets and the narrow-minded short men who pursued her). And though people kept telling us that we, along with all the other ‘female comedy’ duos on the circuit, had the potential to be the next French and Saunders, it was not enough for the tall one.

‘I want to be compared to Russell Brand’ sighed she. ‘Why do people always compare us to French and Saunders? It’s so lazy.’ I heartily agreed. We were much more like Morecambe and Wise. ‘Bagsy Ernie,’  I chirped. ‘Well he is the funny one.’ Maria looked down at me and glowered as we clicked our heels together and danced off down the street. All she wanted was to plunge herself into all kinds of Valkyrian outdoor adventures such as white-water rafting, whittling and wild guitar. So she moved to Bristol.

I keep writing on my own

Valiantly vowing to wow the comedy crowds as a latter day Ernie Wise, in 2013 I wrote a solo show and performed it in the Free Fringe at Bannerman’s. For the most part I had an amazing time, but on the days when the jokes fell flat I had no one to blame but myself, and no one to sink a pint with, except all the other lonely comedians in Edinburgh, and they’re no fun I can tell you. (Hey guys, at least you got reviewed! And I bet you didn’t have a 30-strong stag party from Leicester dressed as fishmongers walk out of your show one by one and wait for you drinking in the bar only to explain that they didn’t feel comfortable watching a woman in a beard. Thought not).

The next year I wrote a solo show and performed it in the Camden Fringe at the Hen and Chickens. Weirdly, through my gumtree ad, I ended up getting this guy as my ticket-tearer. He said he was a fellow actor and fancied hanging out at a show to get some writing inspiration himself. Everyone kept telling me they recognised him and eventually my usher confessed to being a regular in Pirates of the Caribbean. Nice way to pull focus Angus Barnett. Especially after trying to fob me off by telling me the recognition must have stemmed from an Aeros ad you did in the Eighties.

But by now I was Fringed-showed out and the ephemeral nature of performing made career progression seem uncertain – if that industry person doesn’t show up, does that performance still exist? And so, although I was loathe to disappoint my fans – my dad, my friend Luke, a reasonable crowd of Edinburgh veterans and a couple of Edinburgh’s heavy-metal scene stalwarts who I’d met while at Bannerman’s – I decided to put performing on the backburner for a while and concentrate on screenwriting instead. How hard could it be?

I’d bought a copy of Robert McKee’s Story in 2005, and having read it half a dozen times and made copious notes I thought I knew what I was doing. I started work on a sitcom based on one of my characters and a couple of screenplays. And I started entering competitions (BBC Writers Room, Rocliffe, Nick Darke). Unsurprisingly I got nowhere. 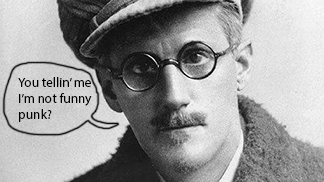 After a year and a half of trying to teach myself screenwriting (and freelancing as a copywriter/sub editor to make ends meet) I decided I needed more structure. I got a reserve place on the National Film and Television School 18-month Comedy writing course, but I knew it was never going to happen when one of the interviewers told me he hated stupid, slapstick-type jokes (at that point I carefully unfastened my handshake buzzer and removed the squirting flower from my lapel) and that he didn’t find James Joyce funny. Sorry, you don’t find Ulysses funny and you don’t like slapstick? There’s just no pleasing some people, eh? At seven grand, the course was going to cost me a big chunk of dosh I didn’t have. And anyway, no one who actually got in dropped out (yeah, good luck to you an’ all), so I signed up for ‘First Steps in Screenwriting’ at City University, a pop at only 415 squids. 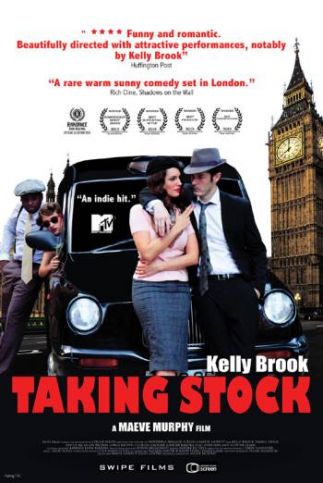 For two hours every Thursday, 10 of us sat in a room with our tutor Maeve Murphy. Maeve had recently written, produced and directed Taking Stock, a British comedy feature starring Kelly Brook, and I thought a working practitioner would make a more interesting tutor than a theorist. At the time, Maeve was going to meetings to try and get her next film off the ground, and, having premiered just a couple of months prior to the course, Taking Stock was getting notice, and winning awards, and it was valuable to have an insight into the trajectory of a film and the filmaker after a release. But in terms of tuition, I found Maeve used her own film as an example to breakdown what she was teaching a little too often. But then she did know it inside out, so there were benefits to exploring it more deeply.

All of us had come to the class with an idea we wanted to work on, and for me the weekly classes and the homework we were given were a great incentive to progress a project. About half the session involved taking notes as the tutor went through the area we were studying that week, say ‘character’ or ‘dialogue’ – which usually involved going through a section of one of the relevant screenwriting books beamed onto a projector screen.  Then we’d do an exercise on those principles, such as a short character sketch covering personality, professional life, private life, and what the character wants as opposed to what they need…Then each student would present their exercise plus their more honed homework assignment and get feedback from everyone else.

What you come away with

Getting feedback is one of the most useful parts of doing a writing course. When you’re beavering away on your own, immersed in your own world, you think you’ve covered everything. But other people winkle out plot holes, what’s not working, and character discrepancies. If you’re lucky, they make suggestions and inspire more shoots in your imagination. And if you’re really lucky, you get a good response, or a compliment and it boosts your confidence so that you believe in your work and you commit to continuing along the writer’s road.

By the end of the course I had a 1-page outline of my project, a 5-page treatment, a few scenes and a more in-depth knowledge of my characters and where I had to take them. Yes, I probably could have done this in my own time, but it would have taken me three times as long. And I wouldn’t have had any outside criticism to inspire me to reach further. 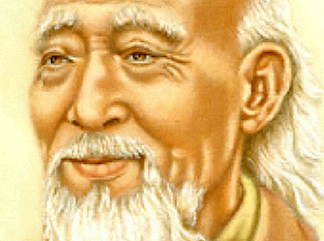 But the main thing I walked away with was the knowledge I had taken another step towards screenwriting. I even have a certificate. Like my favourite Chinese philosopher Lao Tzu says…

"The journey of a thousand miles begins with one step."

(Ok, so I’ve never read any of his actual tomes, but you know what I mean. Positive Mental Attitude guys. Peace out.)