One sunny afternoon, strolling round the park with the fantastically talented Dan Lees – the pair of us looking like a pale imitation of Withnail and I, with our two-day-old stubble (me) and the bitter taste of overpriced coffee in our mouths (hello East London) – I confessed to feeling stuck. Stuck in a comedy black hole where I did the same old spiel that was beginning to jar.

Having trained as an actress, I often write rambling monologues which I then learn every single word of, and though I've created some good stuff using this method, I felt like I wanted a bit more freedom. And I wanted to stop playing safe.

Dan smiled. ‘You want to reach the edge huh? You need to try clowning.’ Clowning? I didn’t even know anyone with big feet, let alone a full-blown clown, but serendipity smiled. ‘There’s a workshop with Mick Barnfather coming up,' said Dan cheerily. 'You should come along.’ Bingo! Suddenly my cup of joe tasted like damn fine coffee.

So I signed up to the four-day Character and Comedy Play course – not full clowning, but a step in a direction that I hoped would give me some new tools.

Every morning started off with games and playful exercises to develop how we could communicate with each other just physically – even the most fleeting evil look or supercilious nod tells a story – then we built on our physical choices using sounds and phrases. So you could end up being a hunch-backed, smiling whistler taking only the teeniest steps to get around, or a stern, growling stomper who harrumphed into everyone.

We also did more structured exercises to develop characters. One involved Mick giving us old newspaper photos to build a character by copying an expression – mine turned out to be a very angry man indeed whose muttered catchphrase was, 'I'm not convinced' and who shouted at Mick when challenged about his stress-levels. Exhausting!

Mick also instructed us in maskwork – where you put on a mask after studying its expression, and then let that character take you over. I don't think I've ever laughed so much as I did at two masked guys who insisted they were from 'Stupid Land' and kept shrugging their shoulders when further questioned by Mick. ‘How do you know you’re from Stupid Land?’ bellowed Mick. 'I know, but I don't know, if you know what I mean,' replied a character named 'Jones' to pretty much everything Mick asked, all the while sticking his tongue out and smiling like a fool. And the thing is – we did know what he meant – if you know what I mean.

Finally, after trying all these different exercises, we moved on to developing a character using the costumes we had brought in. I had a blonde wig, a truly terrible oversize dress and some awful plastic shoes from a charity shop – 'absolutely disgusting' was just one of the many compliments I received on the shoes. After a few exercises trying out various gaits and voices, my character ended up being a psycho old lady from Kent called Margaret, obsessed with deadheading roses and spying on her neighbours. A reassuring vision of my future. 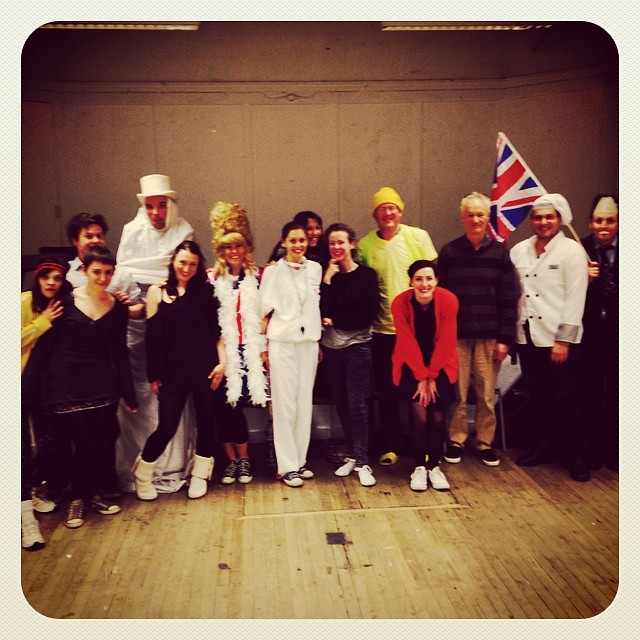 I laughed every day doing the course and I learnt so much from watching other people doing the tasks Mick set. Mick was really good at suggesting ways to move forward when performing, encouraging us to exaggerate everything we did, and pointing out where we could have gone further. It was the complete opposite to drama training where the goal is naturalism, and, realising that as a comedy performer it's better to go too far than to not take risks, was really helpful for me.

Did I get what I was looking for? Yes. Definitely. That week, I performed two characters at the Laugh & a half comedy night I co-run, both without a script! Mick had given me the tools to develop a character through finding face, physicality and voice, rather than my usual method of writing an essay and trying to whittle it down to the funny bits. It felt like real freedom to me. I even spontaneously rapped as one of the characters I came up with (a mulleted work-bore named Roger) and I have no idea what I said, or how rad my rhymes were, but I'm sure it was almost genius.

The other joy of doing a course and learning something is the massive energy boost to your brain that gets you back in to a positive mindset of creating and performing – vital if you’re doing other jobs not related to performance – and let’s face it, most of us have two or three careers these days. So it’s really important to keep training and experimenting, to keep feeling the joy – which leads me onto the other massive plus of courses – meeting talented performers and crying with laughter at their antics.

I was very lucky with the group of people who were on the course (thanks guys), but I also think a lot of the fun, positive atmosphere was down to Mick's enthusiasm and skill. I left the course raring to get back on stage and with a dozen new friends just as into scouring charity shops for manky character shoes as I am. Oi! I saw that spotted plastic wedged boot first you clown!